22 Because of the Lord’s great love we are not consumed,
for his compassions never fail.
23 They are new every morning;
great is your faithfulness.
– Lamentations 3:22-23

* Devotion made by Rev. Ruel Chavez during the faculty orientation of PTS-CAS

Praise the Lord for the two modules that we have this week, Mission and Evangelism under Dr. Timothy Park and Hermeneutics for Biblical Counseling under Dr. Richard Perhai. Unfortunately, because of the enrollment, I was not able to attend the whole Hermeneutics for Biblical Counseling class. Nevertheless, though my attendance isn’t complete, still I learn a lot and I am now starting to give exegesis a second look.

Our text this afternoon is one of those passages we discussed in the class. Usually, in my sermon preparation though I paid attention to grammar, exegetical outline and homiletical outline, I do not pay much attention to historical background and literary structure. In this particular passage, even taking a partial consideration of the historical background and the literary format of the text will give you insights that I think are very relevant for our time.

Take for instance the character of Jeremiah as a prophet and the situation of Jerusalem during the time this Lamentation was written. Jeremiah’s ministry was not popular. He was rejected by the Jews of his time. He was considered a weeping prophet. And Jerusalem was lying in desolation. God destroyed the city and many Jews died and exiled. But just reading the first sixteen verses of Lamentations 3 you will have a picture of the kind of suffering the prophet was experiencing. Read how the prophet Jeremiah described his suffering: “he has driven and brought me into darkness without any light;” “against me he turns his hand again and again the whole day long. He has made my flesh and my skin waste away; he has broken my bones; he has besieged and enveloped me with bitterness and tribulation; he has made me dwell in darkness like the dead of long ago. He has walled me about so that I cannot escape; he has made my chains heavy;” “he shuts out my prayer; he has blocked my ways with blocks of stones; he has made my paths crooked. He is a bear lying in wait for me, a lion in hiding; he turned aside my steps and tore me to pieces; he has made me desolate; he bent his bow and set me as a target for his arrow. He drove into my kidneys the arrows of his quiver; . . . ” All these expressions describe the suffering of the prophet. And what is shocking here is that he saw all these sufferings as coming from the hands of God.

This kind of message can be considered “radical” or “counter-cultural” in our time in at least two ways: one, this is counter-cultural in a generation that fails to embrace the reality of pain and suffering and views Christian life as purely a matter of triumph, victory, success, and answered prayers. Observe a typical church. When someone has a problem, let us say for instance, depression, financial or marital problems, it is rare to see a church or a pastor willing to listen to your stories. Your testimony is considered too negative and it fails to inspire anyone to live a victorious life. So the response is either a superficial listening or it is as if, there is a conspiracy of silence towards those who face trials and sufferings in life. As a result, the suffering individual feels either ignored or lonely. In his mind, nobody really cares and the sad thing is that, Christianity and the gospel are dragged with this kind of insensitivity to human pain and suffering. The irony is that Christianity itself and the gospel though the fact of resurrection is acknowledged, but the cross is their very foundation and root, which is a symbol of suffering.

The second thing where this kind of message can be considered radical and counter-cultural is in relation to the exact opposite of triumphant spirit. In this kind of sentiment, a person sees nothing but negativity and hopelessness. He fails to see the greatness of God’s faithfulness in the midst of pain and suffering. So in both these cultural trends, the message of prophet Jeremiah remains relevant. For the prophet, pain and sufferings are real. They are not denied. They are seen as coming from the hands of God. But in a culture where the dominant message is that only good things can come from the hands of God, to talk about sufferings and trials coming from God is very unpopular. And this is not a good message to grow your church.

In our class, we learned that Lamentation is arranged in a chiastic pattern using acrostic. The description of suffering in this lament has been arranged from aleph to tau, or to use the English alphabet, from A to Z. I think it was Eugene Peterson who identified that based on this kind of literary structure, we could glean at least two insights: One, that from the perspective of the prophet, his suffering and the suffering of his people are adequately listened to, or “has been given a voice” so to speak. So this text, taking it as God’s word, we see here the God who does not take our sufferings for granted. And not only that, since this lament has been arranged in such an orderly fashion, this tells us that suffering and pain do not have the final word. They have their limits, their boundaries. Though taken exhaustively, they are not infinite. God has the final word.

And so taking both these historical and literary considerations will help us see both the human and divine side of the message of the prophet. We see here that the faithfulness of God is indeed great and it has the final say in the midst of pain and suffering. Amen! 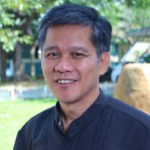 Ruel Chavez is a Presbyterian minister and a theological educator. He has taught several Bible school extensions under Evangelical Presbyterian Mission in the Philippines for the past 20 years. He served as full time faculty member of the Presbyterian Theological Seminary from 2006 to 2009. After eight years, he returned to PTSCAS last 2017 and is now serving as the Academic Dean of the institution. His major is in the field of theology, but he also earned 34 units in Doctor of Education in Educational Leadership.